This site is maintained by John Brummal. If you have any news and comments about this Eagle Creek web site e-mail me at: John@Brummal.com

For the last two weekends a group of members and friends worked on the Lodge.  We removed the ceiling in the main room and the ping pong room.  Memorial Day weekend we shored up the rafters to prevent the roof from collapsing.  I'm please to let everyone know that the roof will stay in place for the next 100 years.

A special thanks to Terrell Hutchens, Lee & Jason Sears, Claudia, Ken Williams, Ray Medlock, Matt Voss and Tommy (a friend of Ray's)  for all their hard work.  And another special thanks to the ladies who fed us, Gerre Sears, Judie Darnel, Janie Jacob, Linda Medlock, Courtney Brummal Voss, and Pam Brummal.

The members that were with us over Memorial Day weekend loved the lodge without the ceiling, so I think we will not replace it.  Terrell took the photos below.

I went to Albuquerque this week and went by Jim and Clara Lou Lee's house and they loaned me their photo scrap book from Eagle Creek.  Take the time and look over the old photos of Eagle Creek.  Just click the link below.

Welcome to Terrell and Judie, new members of our Eagle Creek family, from Lubbock.  They have purchased the Parsons cabin.  They have already done a lot of work and they are planning on spending the next two weeks doing more.  If you go to your cabin, stop by and welcome them. They will probably put you to work.

Over the 4th of July we had some more rain for a grand total of about 4" in the last month.  When it rains the creek comes up and if there is enough the pond will overflow.  But after a couple of hours the creek drops back down.  We are missing the snow from last winter to keep the springs flowing.  There is plenty of water for us to use, and it does rain a little every day.  So come on up.

For those who missed the 4th of July weekend, we had a great time.  Below are some photos of the highlights.

Lee Sears had the big 60 at a get-together at the Brummal's cabin.

Howard and his and Janie's two daughters, Abby and Stacy - Stacy, Mary Ann, Janie and Mary Ann (friend of Janie's from Tulsa)

One of the most beautiful spots in Lincoln County is Eagle Creek. The winding road follows the creek bed for several miles up into the Sierra Blanca Mounties and finally ends in a settlement of summer homes and lodges in the State Game Reserve where every day winter and summer you can see turkey and deer and occasional bear. The story behind this group of cabins goes back over twenty years.

A group of Carrizozo families who were best of friends started looking for a spot to build a summer retreat. The wanted to be far away from town and someplace in the mountains. This requirement might not be too hard to fulfill but one other common bond had drawn them together. In each family at least one person suffered with hay fever. To find a place where they could be comfortable and relieved was their main objective. Each summer several families would take camping trips looking for the right place.

T. E. Kelly, then of Carrizozo and still of Carrizozo, found Eagle Creek and the location he thought would be right. In the summer it is always one of the greenest and coolest and nicest places in the mountains. In the fall the quaking aspens in the locality turn it into a golden wonderland. In the winter the snow and silence in the narrow canyon make it another world. The first summer Mr. Kelly took for or five interested families just as soon as school was out to the place he had discovered. They were S. L. Squire, R. E. Lemon, J. B. French, George J. Dingwall, and A. S. Campbell.

Where the clubhouse now stands they pitched their tents in a circle. Cooking was done for the whole group over the fire built in the center of the circle, and "when the cooking was done, the dishes washed, and the dishwater thrown out the work was over." They lived that simply, and loved it.

All of the families present agreed that this was the spot for their project. Thirteen acres of land was leased from the forest and from the beginning there were one hundred twenty members. Each of these members paid dues and the money went right into a fund to build a clubhouse which was completed in 1920, and is still being used.

The Clubhouse has a large living room with a fireplace, a kitchen, and four rooms now used for various recreations but originally used for bedrooms. When it was completed the group had some sort of a party or group activity every night. Amateur dramatics were fun, charades, or probably just story telling around a fire place kept them entertained many nights. The original piano is still there and still played daily.

Soon after this J. B. French and R. E. Lemon built a duplex for their two families. Others were still camping out around the spot but planning to build in the future. The first cabin was followed by three others the very next year. The Dingwalls, Squires and Campbells built. These houses were built rather close together and all in a row. T. E. Kelly built next but right across the river from the others.

In the group there are now twenty-four cabins. There is only room for one or two more but that is enough. Before anyone can build they must apply to the Board of Directors of the group. This board is elected each year by the cabin owners and the one business meeting is held the 4th of July for that is the day when all try to be present. Both for the business meeting and for the annual picnic. The same procedure was followed this year. George Dingwall of El Paso was the outgoing president. The new offers elected are A. A. Swanson of El Paso, president; J. L. Lee of El Paso, vice president; and H. E. Lemon of Carrizozo, secretary and treasurer.

After cabins started being built at Eagle Creek Lodge the group hired a caretaker to live there the year around. This proved unnecessary however and now D. L. Luck of Alto keeps and eye out for intruders and trespassers.

During the summer season the families enjoy all sorts of outdoor activities. They have their own chuckwagon for breakfasts or barbecues; many of their regular meals are eaten outdoors picnic style in the lovely surroundings.

November 2000: Again, our Eagle Creek family has been hit with the loss of another member. It is with a sad heart that I must add my father. Bob Brummal passed away in his sleep the morning of November 21st, 2000.

October 2000: This has been a sad summer and fall for friends and members of the Eagle Creek Summer Home Association. We have lost: Sam Tobias - a good friend of the association, Mike Parsons - member, and Reagan Legg - a long time member and a past president. Our heart felt sympathy to the families of these wonderful people.

May 2000: Hearing about the fire in Ruidoso I decided to drive up and see if we were in any danger of the fire spreading to the Eagle Creek Summer Home Association's cabins. I'm glad to report that the wind is blowing the fire toward Roswell. The prevailing wind is almost always to the east. Our Eagle Creek is to the west. If you know where Lower Eagle Creek is, the fire is on the east side of that canyon. With all the fires running around New Mexico, especially in the Ruidoso area, Cree Fire, Lincoln, and Carrizozo, I encourage you not to go up to your cabin until it has had a good rain. Gerre Sears is up at her cabin but will cut her month long stay two weeks short because of lack of water in the creek where her pump is. The canyon we are in is a box canyon and if there is a fire in our canyon you will not be able to get out. 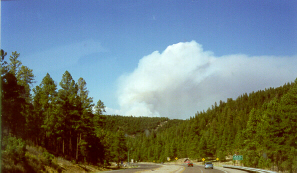 This was taken between Alamogordo and Ruidoso. 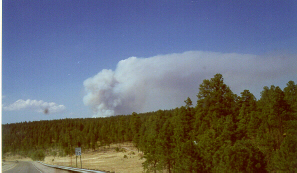 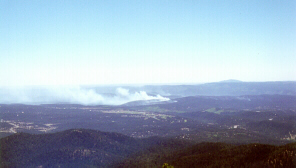 Taken from the Fire Lookout at Monjeau. Ira was on lookout while Gerre Sears, Ken Williams and I were there.

There are 3 or 4 smaller fires in front of the main fire.

With Ira on duty there is nothing to fear. As you can see the wind is blowing the fire to the east (Eagle Creek is to the West). 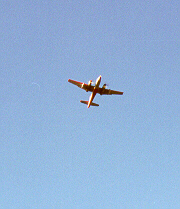 A plane flying over to drop slurry on the fire. 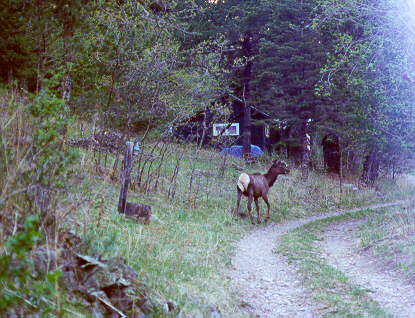 I sneaked up on this elk in front of the Juni cabin.