Thanks Ron DeVasto for the clarification on the 8" Platoon. 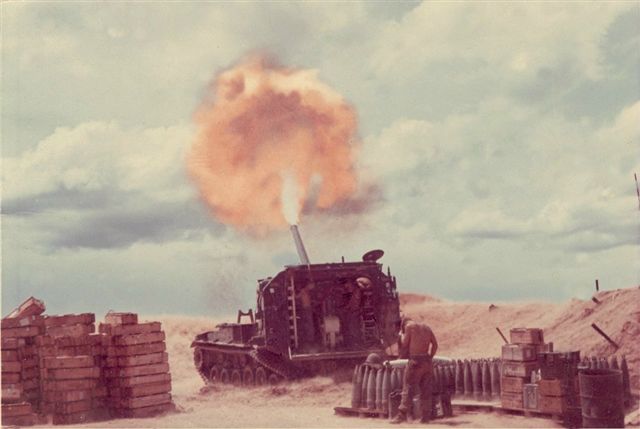 "FIREBALL" IS ON IT'S WAY

Thanks to Doc Pettee for taking such a great picture and to Jerry Schexnayder for cleaning up the picture.

I got tired of trying to find a web site about the 5th 155mm Gun Battery so I thought that I would just make one myself.

If you were with the 5th 155 e-mail me and I will start a e-mail list of the old battery.

In Vietnam we did not know that there was a logo for 9th MAB, but there is.

The older I get the more I forget names. A couple I can remember are LCpl Charles "Chuck" East, SSgt Hull and Capt. Steel (great name for a Marine Officer).

If you want to hear the Marine Corps Hymn again just click below:

Thanks to Jim Burdge for send in this article:

1. Purpose. To publish the combat history of 5th 175mm Gun Battery (SP) REIN in the

2. The combat history of 5th 175mm Gun Battery in Vietnam is a short but proud one.

The battery was activated on 1 August 1966 at Marine Corps Base, Twenty-Nine Palms, California as the 5th 155mm Gun Battery, On 23 July 1967, two platoons of 155mm Guns and one platoon of 8 Inch Howitzers came ashore at Chu Lai in the southern part of I Corps Tactical Zone. During the remainder of 1967, the battery operated primarily in the area around Chu Lai and DaNang, but began moving North near the year's end. By December 1967, the battery was spread the entire length of I Corps,from Chu Lai in the South, to Dong Ha in the North.1968 found 5th Guns operating throughout Northern "L Corps. Cam Lo, Ca Lu, the Rockpile and Khe Sanh became well known positions to the Guns. One position,occupied from July to December 1968 was finally closed out, only to be reopened again with the help of 5th Guns a year later, this being Camp J.J.CARROLL.

In March of 1969, the first of the new 175mm Guns were received. The first round of the new weapon was fired by the Commanding General of the 3d Marine Division. By April, the entire battery had acquired the new 175's and on 29 April 1969 the unit was officially re-designated 5th 175mm Gun Battery (SP) (REIN). Early 1969 found the battery occupying Vandergrift Combat Base, Fire Support Base Elliott, and Dong Ha West. In October, the six 175mm Guns moved into the newly reopened Camp Carroll, while the 8 Inch Howitzer Platoon went north to FSB Alpha-2 on the DMZ. At this time, 5th Guns began a unique and rewarding relationship with the United States Army. While our parent unit remained the 11th Marine Regiment of 1st Marine Division, operational control was passed to the 108th Artillery Group of XXIV Corps Artillery. During the next four and one-half months, 5th Guns participated in some of its most challenging operations. While working with 108th Group, the battery fired over 26,000 rounds,more than 6,000 rounds per month and participated in three heavy artillery raids.

During it's tour in Vietnam, 5th 175mm Gun Battery participated in a total of 32 separate combat operations, while only losing five men to the enemy. As a 175mm Gun Battery for only 11 months, 5th Guns expended over 45,000 rounds of heavy artillery against the enemy forces in Northern I Corps. While 5th 175mm Gun Battery spent only two and one-half years in Vietnam, it operated the entire length and breadth of I Corps, from Chu Lai in the South to Gio Linh in the North and West to Khe Sanh.It's combat history ranks as one of the finest and is a credit to the Marines who served with the battery and to our beloved Corps.

Activated in August 1966 as a 155mm gun battery, this unit had been in Vietnam since July 1967, initially near Chu Lai and Da Nang and in Northern ICTZ since the beginning of 1968. In March 1969, it had received its 175mm guns, and in October of the same year, as the 3rd Marine Division redeployed, it came under operational control of XXIV Corps, attached to the 108th Artillery Group. 5th 175mm Gun Battery.

The single Marine artillery unit not under 11th Marines control, the 5th 175mm Gun Battery (SP) (Rein), operated in northern I Corps. Its command post was at Dong Ha Combat Base, while its 175mm guns were at Camp Carroll and a reinforcing platoon of 8-inch self-propelled howitzers was located at FSB A-2. This battery, under the operational control of the 108th Artillery Group, USA, fired long-range missions in support of the 101st Airborne Division; the 1st Brigade, 5th Infantry Division (Mechanized); and the 1st ARVN Division. It also attacked targets in enemy base areas along the Laotian border. The battery's tracked 175's periodically moved west along Route 9 to participate in Army artillery raids on enemy bases not in range from American positions.
Subject:
Vietnam Perspective by Retired Lt.  Gen.  James Link, U.S.  Army, former
commander of Redstone Arsenal, delivered this address at the breakfast
commemorating the arrival in Huntsville, Alabama of the traveling
Vietnam Veterans Memorial Wall.

Remember, nine million men and women served in the military during the 13 years of the war, and three million of those served in the Vietnam theater.  Two thirds of those who saw duty in Vietnam were volunteers and 77 percent of those who died were volunteers.  Our American citizen-soldier performed with a tenacity and quality that may never be fully appreciated or truly understood.  Should anyone think the war was conducted in an incompetent manner, should look at the numbers: Hanoi admits to 1.4 million of its soldiers killed on the battlefield compared to our 58,000, and about 250,000 South Vietnamese.  And if someone tries to convince you that Vietnam was "a dirty little war", where Air Force and Navy bombs did all the work, you might remind them that this was the most costly war the grunts of the U.S.  Marines Corps ever fought-five times as many dead as in World War I, three times as many dead as in Korea, and more total killed and wounded than in all of World War II. To the Vietnam veterans here today, and to all those whose name appears on the Wall, I say you are all heroes.  Heroes who faced the issues of this war, including your own possible death, and after weighing those concerns against your obligation to your country, you decided to serve with honor.  In the words of a timeless phrase found on the Confederate Memorial in Arlington Cemetery, "not for fame or reward, not for place or for rank, but in simple obedience to duty, as they understood it." I ask each of you to treat each other with the dignity and respect you have earned.  Reach out and welcome a fellow Vietnam veteran home.  God bless each of you, and may God continue to bless this America we love and serve.


This site is not affiliated or indorsed by anybody, especially by the United States Marine Corps